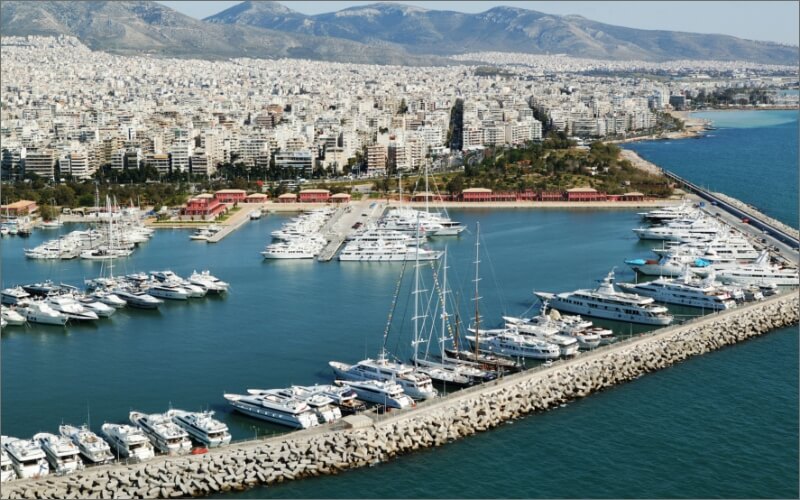 In the 50s to 60s girls in order to be able to leave their home, should have been married. Fortunately for me this has changed, I am already over 25, I am single and I think of staying alone in a suburb of Athens. Because of having grown up in the northern suburbs, everyone would expect me to stay at my base but for me the ideal area is Palaio Faliro. Palaio Faliro is a coastal district and a municipality in the southern part of Athens and luckily for my parents has two main avenues:  the seaside Poseidonos Avenue, which connects it with the city, the port of Piraeus and the other southern suburbs, and the Andrea Syngrou Avenue respectively, which connects Palaio Faliro with the Athens city centre and the northern suburbs so that my parents  be able to visit me.

And the day I started staying alone came, and together came a cousin of mine from Thessaloniki who wanted a guided tour in the area. And of course, the day could not have begun without a coffee at the Marina of Flisvos, the Mega-Yacht destination in Greece. For the first time in Greece, an upscale Marina in Flisvos is operating according to top international specifications, accommodating the special needs of mega yachts, as it is the ideal base for sea-loving voyagers eager to explore more than 3.000 Greek islands. Today, the creation of a commercial complex across an area of 3.800 sq.m has been completed offering both yacht owners and visitors from all of Attica, numerous dining, shopping and recreational opportunities, while sporting enthusiasts can enjoy jogging, walking and cycling activities- all within a friendly, peaceful and natural environment overlooking the blue Mediterranean Sea.

Within walking distance there is the Naval Tradition Park, which hosts the Greek Cruiser Georgios Averof, a memorial ship that served the First Balkan War, the World War I, the Greco-Turkish War of 1919–1922, and the interwar period. The Naval Tradition Park also hosts the USS Charrette, a Fletcher-class destroyer of the United States Navy, named for Lieutenant George Charrette, who was awarded the Medal of Honor for heroism during the Spanish–American War.  And finally the Park hosts Olympias, which is a reconstruction of an ancient Athenian trireme  and an important example of experimental archaeology. It is also a commissioned ship in the Hellenic Navy of Greece, the only commissioned vessel of its kind in any of the world's navies.

We were so excited about the historic ships, me that I never had the opportunity to make a tour like that although living in Athens and also my cousin that we both agreed to continue with the historical monuments of the region. So the next station could not have been other than the Phaleron World War II Cemetery. The Phaleron War Cemetery, the Athens Memorial, is the cemetery of 2.067 fallen Commonwealth soldiers since the conquest of Greece by the Germans in 1941 and 1944. Initially, the site served as a cemetery for the Commonwealth soldiers who fell during the 1944-1945 Civil War. Then the Greek state with the Commonwealth War Graves Commission decided to turn it into a cemetery for all Commonwealth soldiers who fell during the Second World War.

Our day ended with a visit to the Hellenic Air Force Museum. HAF’s museum is by nature an aviation, military and technological museum. According to the ICOM classification, HAF’s museum belongs to the category of historic-technological museums that study and present a specific human activity in all its forms. In this case, the museum presents the Hellenic Air Force and its history. Another initiative worth to be mentioned is the creation of a collection of vehicles of historic value. The most interesting piece of this collection is a rare Dodge ambulance of the 2nd World War, which was restored to the form of HAF’s vehicles during the 50’s.

Of course Palaio Faliro is not just an area of historical interest, it is also a place dedicated to arts and sports!

A great example of the ‘sporting face’ of Palaio Faliro is the Faliro Coastal Zone Olympic Sports Complex in the coastal zone of Athens consisting of two indoor arenas and a beach volleyball stadium, where Handball, Taekwondo, and volleyball events of 2004 Summer Olympics took place. More analytically: The Faliro Olympic Beach Volleyball Centre is a stadium holding a total of 9,600 individuals that hosted the beach volleyball competition for the 2004 Summer Olympics in Athens. Furthermore, the Faliro Sports Pavilion Arena is an indoor arena and it was the site of the preliminary matches of handball and taekwondo competition in the 2004 Summer Olympics. The arena also hosted the 7th MAD Video Music Awards, The Prodigy-a sold-out concert event, Tiesto during his Kaleidoscope World Tour, ‘Holiday on Ice’ shows and the Greek Legends event by Riot Games. And to conclude, The Peace and Friendship Stadium, commonly known by its acronym SEF, is a multi-purpose indoor arena that is located in Piraeus, on the coastal zone of Attica. The arena is mostly known for being the home to EuroLeague team Olympiacos, and is occasionally used for events like congresses, music concerts, and indoor motocross races. The Scorpions, Phil Collins, Dire Straits, Status Quo, UB40, Gloria Estefan, Deep Purple, and Placebo, are among the artists who have performed at the Peace and Friendship Stadium. The first Panhellenic Athletics Indoor Championship, the 1985 European Athletics Indoor Championships in March and the first Greek Ice Hockey Championship in 1989 took place in this stadium, as it is the central venue of the Faliro Coastal Zone Olympic Complex.

If you are also one of us who loves art, I suggest you visit the Athens Planetarium, which is one of the biggest and the best equipped digital planetariums in the world and also the Stavros Niarchos Foundation Cultural Center, one of the world’s leading private, international philanthropic organizations, making grants to nonprofit organizations in the areas of arts and culture, education, health, sports and social welfare, including new facilities for the National Library of Greece and the Greek National Opera, as well as the 210,000 m² Stavros Niarchos Park.

Another artistic visit you may have is at the Cultural Center ‘Flisvos’. It is worth mentioning that it was decided that “Flisvos is a symbol and landmark for Palaio Faliro and is characterized as a monument belonging to the area’s historic and cultural heritage”. Since then, the building has become the focal point for the city’s social and cultural life and has accommodated a variety of cultural, entertaining and educational activities and because of its position, there are many requests from artists, scientists, groups and clubs to use Flisvos in order to present their work to the public.

Moreover the church of the Assumption of Virgin Mary (Panagitsa), which copies the model of Agia Sophia in Constantinople, is considered to be a very important sight of the region. On the other hand, I cannot help mentioning the Toy Museum Benaki, which is a toy museum, amongst the ten best in Europe, that mainly consists of Maria Argyriadis’s collection along with some additions. It presents toys, books, printed materials, clothing and childhood items from Europe, Africa, Asia and the Americas.

And for the end, of course, I left the best part of my story!

One day free from museums and cultural activities, one day to enjoy the sea and warmth of the sun, we are in the southern part of Athens, which has plenty of the last two. There is nothing better than swimming and playing in the sea and then sunbathing with a cocktail in hand. And when the sun goes down, a bike ride on the squares of the area would be perfect for the afternoon. Fortunately, Faliro is an area with many squares, such as Ethnikis Antistaseos Square, Ikaron Square, Agia Varvara Square, Themis Square etc.

What else do you have to do after such a big day? It is time to fill the batteries, of course, with delicious food and sweets of various kinds. The problem was that we did not know which restaurant to pick up, as there are so many that all have something special: ’Mpampis’ has the best meat patty in the area for 60 years, the ’Sin Burger Bar’ having fresh and tasty dishes, among which are burgers, spaghetti and salads, that you are going to eat and you will definitely be a sinner,’To Mikio is a restaurant that reminds you of Crete with authentic recipes from the island and ‘Da Bruno’ is an Italian restaurant where Dimitris (owner) travels to various regions of Italy and collects valuable recipes.

But after the meal, it is time for the sweet. We thought of going to ‘Cookie Man’, offering warm, delicious cookies of all the possible flavors you can have in mind, which you can put in your drink or enjoy them as the sweet of your day. They offer cookies covering all tastes: gently and fresh, softer or more crispy, stunningly colored or as simple as the classic cinnamon, oreo towers but also stuffed with coconut cream. Another sweet spot choice is ‘Sarayli’ and this is because we are lovers of the authentic sweet of Constantinople and last but not least is ‘The pies of Sofia’, for salty and sweet pies, tasty pies, and handmade of course. Whatever we choose, it will be perfect.

For all the above reasons Palaio Faliro will always be the area of my dreams!